Geography of Rewa is characterized by immensely rich flora and fauna, which has subsequently helped her in developing tourism, agricultural sector and other sectors of the economy. However, Rewa’s economy still hasn’t realized and tapped flora and natural resources to the fullest, which if it did then Rewa will surely witness immense economic development and prosperity. Below is more detailed information about all these natural resources and other geographical features like climate, land utilization etc. 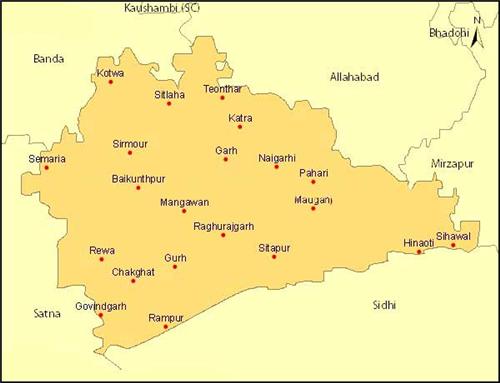 Rewa is located between 24.53°North latitudes and 81.3°E longitude. It is surrounded by Uttar Pradesh state in north, Sidhi district in east and south west, Shahdol district in south and Satna district in west. As far as total land area is concern Rewa district covers 6,240 km of land, out of which approximately 610632 hectares of land is used by agricultural sector and nearly 3072.41 Sq. K.M of land compromises of forest area.

Rewa has humid subtropical climate, which simply means summers are immensely hot and winter season is mildly cold. As for monsoon season is concerned, then annual rainfall hovers around 860 mm, which can be termed as more than moderate. Summer season (March to mid June) minimum temperature remains at 30°C and maximum 40°C. Maximum temperature is witnessed during month of May. Average rainfall during monsoon season which falls between June to September is 880 mm. During winters that is from October to February average temperature remains about 25°C. The coldest month is January when temperature falls to 15 degree Celsius.

One of the main reasons Rewa doesn’t have any dearth of underground water is because many important rivers and tributaries flow through the district. The most prominent being Bichiya river, which flows through the very heart of Rewa district. All other rivers passing through the district are actually tributaries. Names of these tributaries are Tamsa river, Mahana River and Belah River. These tributary rivers hold immense importance for tourism sector, as they create immensely beautiful waterfalls and some of which have become tourist
hotspots.

Rewa has huge pile of minerals, which today has become boon for all the mineral based industries operating in the region and is equally giving huge boost to its economy. Murum, Flag Stone, Stone Gitti, Sand, Lime, Boxcide are some of the major minerals found in this parts of Madhya Pradesh. Their huge presence has given huge boost to cement based industries in the district. In fact owing to huge presence of limestone Asia’s biggest cement factory is operating in Rewa district itself.

All in all, from above information the definite conclusion that can be drawn is that Rewa is home immensely rich natural resources, which has not only made this region scenically beautiful but has also given much needed economic boon.